Read the facts and draw your own conclusion but be well aware  – Your neighborhood, your street is next!  GET INVOLVED IN LOCAL POLITiCS!

This has indeed been a “remarkable experience for constituents” – but probably not in the way Board President Don Horsley intended.

First off, THANK YOU to the local reporters that covered the meeting:

And THANK YOU to the 2 Members who took the time to THINK and opposed a 5-year issue the board was CLEARLY unfamiliar with.

A developer, makes unfounded and outright false claims with a smile, tells board that it’s sunny on a rainy day.  3 of the 5 members put on sunscreen, not bothering to look out the window.

The Backstory and the Facts

In 2004 the residents of the Rutherford Estates area submitted a rezoning request for the 1300 and 1301 WOODSIDE ROAD lots.

Over the past three years, several modest homes have been torn down and replaced with substantially larger houses. Some large parcels have been subdivided and developed with large houses. These new houses range in size from 3,000 to 6,000 sq. ft. They now sporadically appear from block to block.

Residents are concerned that the character of the neighborhood will be significantly altered if larger and larger houses continue to be built.
Several meetings have been held in the neighborhood to discuss this issue. Residents have agreed that new zoning regulations are needed to control house size, height, and bulk.

The Board of Supervisors agreed 5-0 with the residents that the 2 lots should be rezoned as “The rezoning keeps the commitment of offering a full range of housing choices and goal number 9, housing exists for people at all income levels and for all generations of families. The rezoning contributes to this commitment and goal by providing limitations on house size that prevents overly sized and very high-cost housing.”

Property Did Not Need to be Rezoned to Build

“The two parcels are right off of Woodside Road, and they are underutilized for their location,” said Camille Leung, senior county planner, during the staff presentation. “The subdivision and additional housing units would help the county meet its regional housing needs allocation and promote a range of housing within San Mateo County.”

Why Rezone for One Person’s Financial Gain?

“In 2004, the neighbors got together and had that parcel rezoned. The reason why is because they didn’t want to see larger and larger houses built,” Curran said. “Now one property owner wants to rezone for his own benefit and put up three-story condominiums that do not match the neighborhood. We also discovered he can legally, under the current zoning, build four houses on the property. So what is the compelling interest to rezone?”

If you have any questions regarding the proposal or the Pre-Application Workshop, please contact Ruemel Panglao, Project Planner, Telephone: 650/363-4582 or E-mail: [email protected].

In 2019 the list was updated and residents were told they would be notified of any new information, Instead …..

Why Weren’t We Informed of the Meeting?

Slocum shared concerns about the lack of notification. While a notice was placed in The Daily Journal, meeting county requirements, he said he didn’t think that was sufficient and that the county should have sent notices to all nearby residents.

“The neighbors claim that they didn’t get noticed about the hearing on Tuesday,” Slocum told the Pulse. “And that’s a huge red flag because if you’re trying to build trust in an area, the last thing you need to happen is for people to think that the government was trying to hide something.”

“To think that it’s OK to put this in a newspaper and call it good doesn’t represent what you like to call, Mr. Manager, creating a remarkable experience for constituents,” Slocum said in reference to statements previously made by County Executive Officer Mike Callagy. (650-363-4129) “There just doesn’t seem to be any compelling reason at least for this supervisor to move this forward.”

Developer Lied about Woodside location, these are Rutherford Ave. Addresses and the driveway is on Rutherford – not Woodside Road! 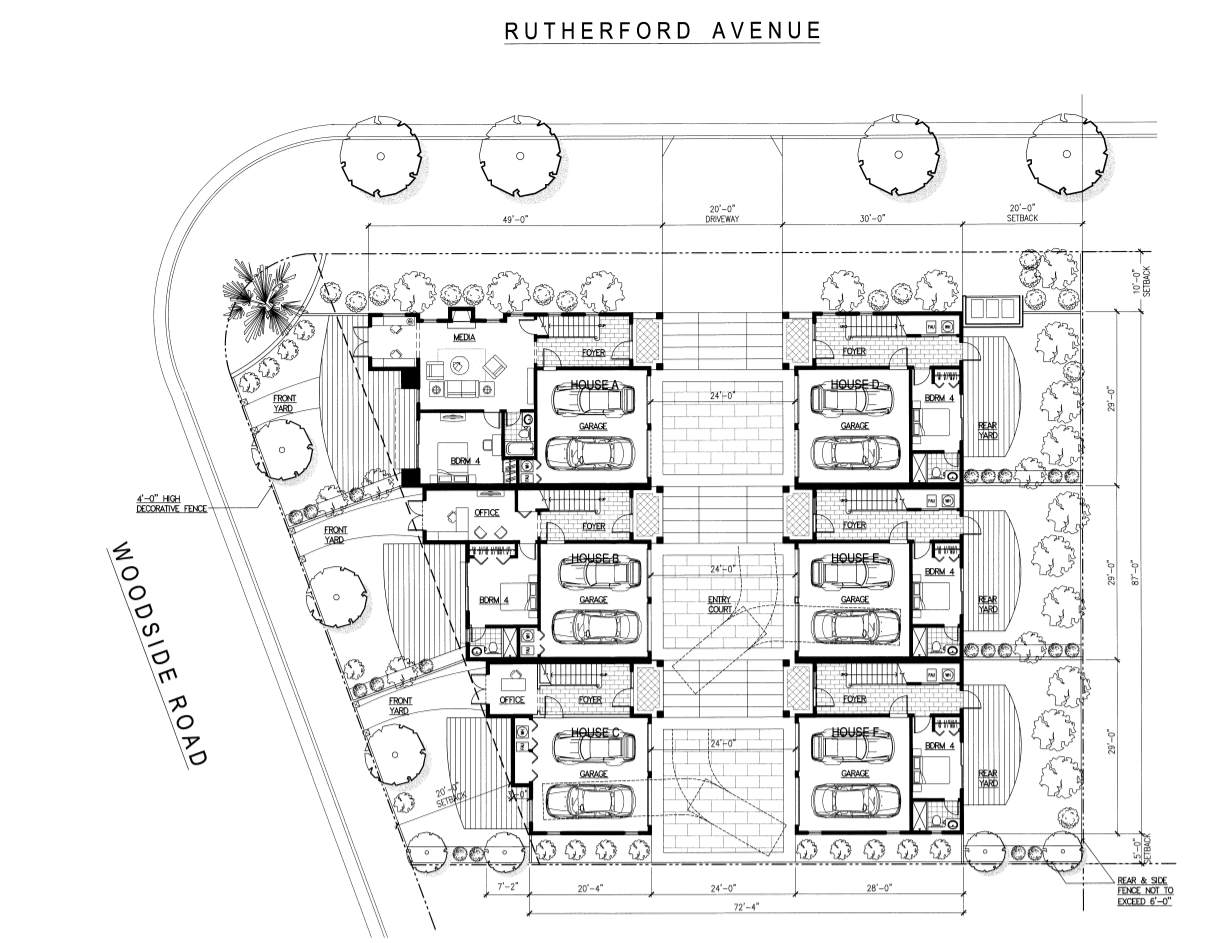 “Fits Neighborhood” SERIOUSLY?!? This is the siteplan 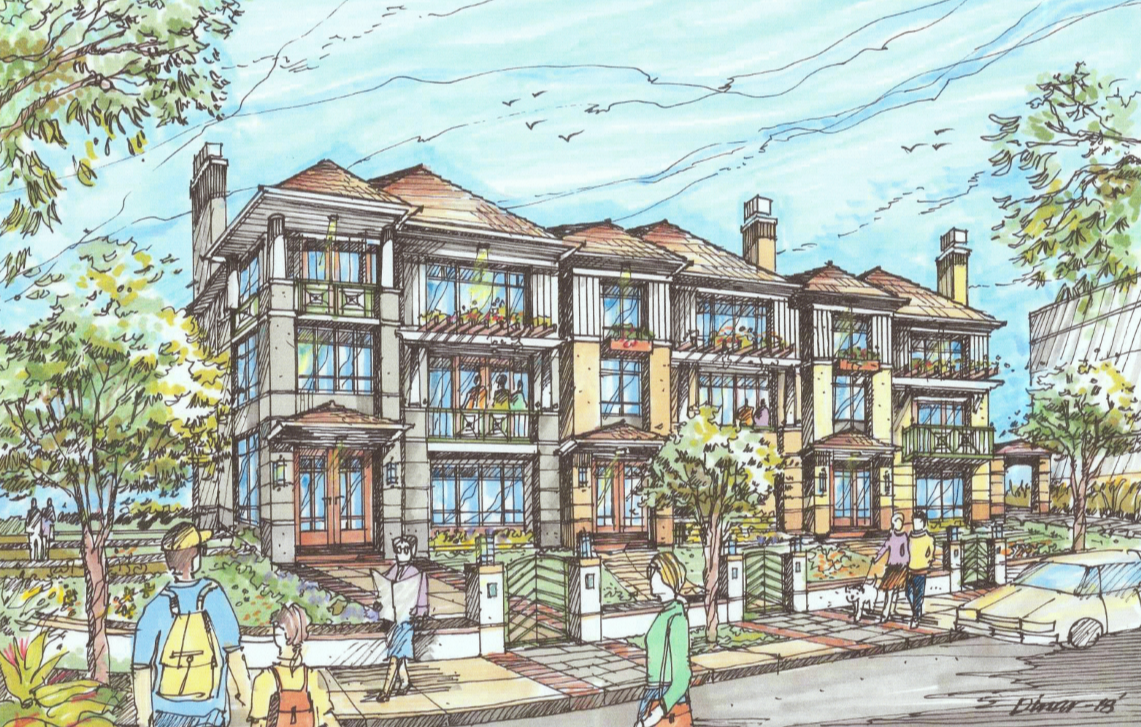 “The developer also noted that [the development] is suited to the neighborhood. No, it’s not. It looks like it should be somewhere downtown San Francisco,” said a resident of Rutherford Avenue identified as Peggy G. “We live in a low- to medium-density area, and our neighborhood is based on this vision. It is not protecting the visual quality of the neighborhood.”

Affordable Unit? How Does that Work?

Meeting members got side-tracked by the Affordable Unit red herring. These units are FOR SALE. They will be Privately Owned!  How does one limit the sale price of private property?

The Developer Moshe Dinar was caught WAY off guard on how that would work.  “I am not a lawyer but I am sure something can be drafted.”  Are you kidding?

Rose Cade, deputy director of the San Mateo County Department of Housing, said that a lower-income family might be able to take advantage of a county program like HEART, which offers down payment assistance.

Our (HEART’s) goal is simple: to help you purchase a home with a 5% downpayment and no Private Mortgage Insurance (PMI).

“There’s very little affordable ownership product being built in our county,” she said. “It’s only one unit but for one family that would be an amazing opportunity.”

Seriously? It’s not. And when they sell?

Not sure! Any lawyers wanna chime in or lend a hand? From One:

I don’t know if your corner owner has a single lot or two, but the law provided for a duplex to be able to be built w/o review (basically w/ministerial approval that has to occur), “and” allows a split lot if the remaining lots have at least a certain %age of the original overall acreage/sq. footage. So basically when allowed, a split lot would allow a 4 plex. That was my understanding. So yeah, without the County doing a rezoning or some other approval to deviate from the status quo for your neighborhood, SB9 itself would’ve only allowed the duplex or fourplex to my understanding

The army barrack (corner) house is historical in that it was moved here from the Menlo Park Camp Fremont base after WWII  The base’s buildings were sold off for a pittance and this is one of the few remaining relics from that time.  It’s never been designated as being officially “historical” but, it probably should have been.  Here’s a book that tells more about the area:  https://www.barnesandnoble.com/w/world-war-i-army-training-by-san-francisco-bay-barbara-wilcox/1122876226

Your neighborhood is next.

Why?
Because this is were we live, these are our neighbors.

This is our neighborhood communication medium.